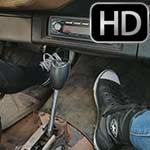 Not every girl has ever had the unfortunate pleasure of having car trouble. Jane, being the expert she is, gives Kali Nova some lessons on what to expect with these old cars. The trainer car is the 1977 Camaro Z28…which is exceptionally stubborn today…and a little stuck.
The girls crank, rev, spin the wheels and stall in their sneakers while Jane teaches from the passenger seat and demonstrates from behind the wheel.