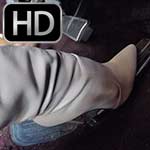 Jane Domino & Riley Rev Up the Caddy in Boots & Dresses

Jane is starting behind the wheel in these light tan boots. She gets the car cranked up after a short struggle and revs the engine up! Jane is filming from the passenger seat and after a bit, they decide to swap places. Jane wants to see how her luck is at starting the car. She turns it off, waits a second and turns the key to start the engine and after a few pumps, it’s running again and she has her turn at revving it up. She gives it some good revs also before Riley slides over next to her and they start taking turns pushing the pedal to rev the engine.