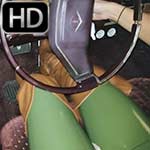 We’re about to go get some dinner and they have to move the Caddy so we can take my Camaro. Jane gets in the Cadillac to try it first but instead of making it quick and easy, she does some flooding of the Cadillac while she waits for Scarlet. Filmed from her point-of-view, her shiny green leggings and brown thigh high boots pump the big floor-mounted gas pedal. She cranks it over…floods it some more…cranks…and finally Scarlet hops in. They chat a bit about if it’s flooded enough to make it hard to start and after Jane plays for a bit longer, Scarlet wants to have a go at it. She plays for a while before Jane goes at it again. They also throw in some revving once they get it moved and parked out of the way.

One Response to Jane & Scarlet Booted Flooding the Caddy at Night