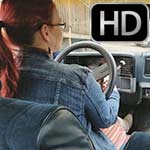 Scarlet Let’s Jane Borrow Her Car & You Ride Along

Scarlet is going out-of-town for the weekend and leaving Jane her old car to use. Jane is having to watch you over the weekend because your parents are out-of-town, so this car of Scarlet’s means you two can get around without having to walk.
Scarlet has to show Jane some quirks of the car as well as give her some tips on how to start it when it’s cold or if she floods it. You watch from the middle of the backseat as Scarlet gets the car started and tells Jane how to pump it. The car stalls because it hasn’t been warmed up yet and you’re enjoying Scarlet’s white leather boots pumping the gas pedal a lot. When Scarlet does get it running, she shows Jane how it will flood out and not crank sometime.
When you all arrive at the car rental place, Scarlet leaves and Jane gets behind the wheel. She looks back at you and wonders if ya’ll can leave now, I mean, Jane thinks she remembers the way home. She gets the car fired up without too much pumping in her blue sneakers and drives down the road to stop by the store first. When you both get back in the car to leave the store, she gets it started in 2-tries, so it looks like she’s got the process down on starting Scarlet’s old Chevy.