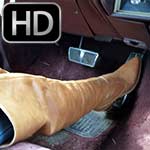 I really shouldn’t call these a behind-the-scenes look as it’s more of a day-in-the-life of me and my models during shoots. Instead of scripts, which there is nothing wrong with, I just point the camera at them and let them do their thing. It’s pretty much as genuine as you can get because I’m along for the ride as much as you guys are.

They both were outside waiting for me to get situated and tell them what we were going to do. When I finally come out, they’re chatting on the deck (I believe this is the first time Jane met/worked with Vivian, too) and instead of me laying out some scenarios, I just let them do stuffs.

First part is Jane cranking up the Monte Carlo to drive us down the street so we can hop in the Cadillac to take it to get gas and run errands with. Once she manages to get it started and warmed up, she parks the Monte and gets in the passenger seat as Vivian is driving the Cadillac first.
Vivian starts the Cadillac and begins our drive where she heads to a gas station. The girls gas up the car and then we go to leave the gas station (with a little sabotaged flooding by Jane) and head to get food. But first, they stop to swap seats so Jane can drive some. Jane does a little revving before leaving the parking lot and we head to the post office, where this segment ends.