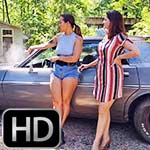 Jane & Vivian Breakdown at Ralphie’s, 3 of 3

This an outside view, almost like a Ralphie-creeper-view of the two girls trying to get their old car started so they can get the hell out of there! Lots of knocking and sputtering from the overheated engine. Ole Ralphie knows they ain’t gonna get too far with the car in that condition…mmHmm!

One thought on “Jane & Vivian Breakdown at Ralphie’s, 3 of 3”