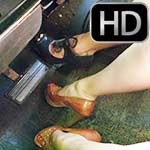 What started out as a video of them making a little noise in the Coronet turned into a hard revving session that overheated the poor old Coronet’s motor. Smoking and steam is starting to come out of the car as both girls rev the shit out of it! Vivian is behind the wheel wearing tan peep-toes while Jane sometimes reaches over from the passenger side with her black block-heel peep-toe shoes. They’re kind of in their own little zone of just flooring the pedal and holding it down to the floor a good bit.