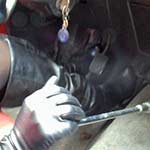 Jenny Re-Learning How to Drive a Stick

I kept this little adventure with Jenny uncut. She said she didn’t know how to drive a stick but when talking with her, I found out she meant that she was taught once but hadn’t driven since. So I just throw her in the Volvo and let it play out. It’s funny to hear her thought process as the car stalls on her. She does good driving the car but like most girls, makes it more difficult for herself than it should be.
She’s wearing this sexy red sweater-dress, black knee high boots, black pantyhose and black leather gloves.

One thought on “Jenny Re-Learning How to Drive a Stick”