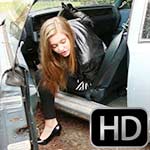 Jenny Cranks the Monte Carlo & Gets Stuck in the Mud, 1 of 2

This is the first video Jenny did with us.  She introduces herself before getting behind the wheel of the very temperamental Monte Carlo.  She has a little experience starting some old cars and it pays off as she gets it started before killing the battery.  Now I have her turn the car around where it’s really muddy and her reaction to being stuck for the first time is priceless!  You can see that “Oh shit, oops!” look on her face.

One thought on “Jenny Cranks the Monte Carlo & Gets Stuck in the Mud, 1 of 2”