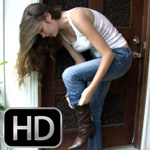 Jess told her boyfriend she’d help him sell his car but I guess she didn’t think about those early birds trying to catch a deal.  A potential buyer comes knocking on her door and she answers the door groggy and hung-over.  She does manage to get dressed and then leads the potential buyer to the Coronet so she can make the pitch.  She talks about the car while the potential buyer makes numerous passes at Jess.  She brushes them off and keeps on trying to sell the car.  She has cranking, battery and moving issues but she hopes she can sway the guy to buy the car.

One thought on “Jess Early Morning Car Selling, 2 of 2”