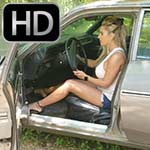 Jewels Killin the Coronet Motor, 2 of 3

The Coronet stalled earlier so now she’s going to try and get it started again while Jane films from outside the drivers side door. It fires up and she starts romping on that gas pedal again some before trying to move it. She doesn’t wait till the engine comes to an idle before dropping it into gear. As the car lurches forward and begins to chug, some dark black smoke starts billowing out the dual tail-pipes.

“She’s got smoke out of all ends.” Jane says as she gets a full shot of the Coronet with white steam and smoke coming out from under the hood while black and white smoke comes out the exhaust. The car keeps dying as she tries reversing it and while it starts kinda easy, it just sounds like a glorified lawn-mower now.

One thought on “Jewels Killin the Coronet Motor, 2 of 3”