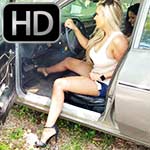 Jewels Killin the Coronet Motor, 3 of 4

This next clip in the series brings you the end of the Coronet’s life. You’d almost think this was a diesel engine with the way it was knocking and spitting out black smoke from it’s tailpipes. Jewels gives it as much revving as it’ll take before it just finally puffs and dies. She steps out and poses for a pic as the smoke billows from under the hood.

Overheated cranking, revving and lots of stalling along with smoke from the exhaust.

One thought on “Jewels Killin the Coronet Motor, 3 of 4”