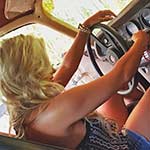 Jewels Struggling to Crank the Camaro in Roman Sandals

It’s hot…her car won’t start….fuck! It sputters and chugs like it wants to run at times, she tries feathering the gas to smooth it out but it’s being stubborn. She does get it started, eventually.