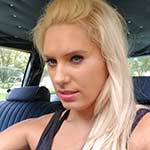 Jewels Revs the Monte in Sexy Heels Waiting on Jane

Jewels is waiting on Jane to get the Bug out of the way and you can hear her crank and rev it up in the beginning. It’s so loud that Jewels thinks she’s revving up the Monte Carlo when it keeps stalling out on her. Takes her a few tries to get the Chevy fired up and running. She revs it up, waiting for the path to be clear and does a little commentary as she films herself.
*sorry for the poor audio*