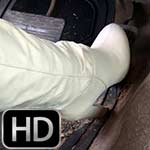 Jewels Filming Herself Revving a Truck in White Boots

She’s got a hold of a Chevy Truck to do some revving in. She’s filming from her point-of-view her white boots over her jeans slowly pumping the pedal to rev the engine up over and over again. She props her left boot up on the dash for a bit.