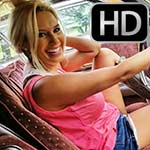 Jewels Fires Up the Caddy to Rev It & Vivian Films

Earlier in the day, the Cadillac wouldn’t start. So they’re trying now to see if it’ll cooperate. Jewels has one a pair of gray leather cowgirl boots, daisy dukes and a pink top. Vivian is there to be her cheerleader. In an unexpected turn of events, the Cadillac fires right up. So Jewels revs it for a bit before Vivian gets behind the wheel to move it. She is only seen in the last 30 seconds or so.