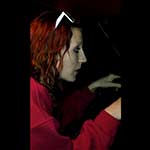 JJ Gets Stuck in the Cutlass at Night & Barefoot

She’s lost, can’t find the house she’s supposed to go to and is now stuck in what looks like someones backyard.  Her front-wheel drive car is flinging mud as her bare foot buries the gas pedal into the floorboard.