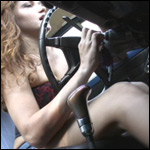 Kimberly Heart is heading to a photo shoot in the Bug.  The car doesn’t want to start at first but she keeps at it, working the gas pedal till she gets it cranked.  The video fades out as she’s pulling away and then fades back in as she has arrived at the photographer’s house.  She changes into the outfit he requested; sexy corset, shorts and thigh high boots.  But when she knocks on the door, ready to work, no one answers.  She calls him but only gets his voicemail.  She leaves an irritated message and storms back to her car.  She changes back into her thong flat sandals and goes to leave.  The only problem is her car doesn’t want to start!  She’s getting scared now and keeps pumping the gas, turning the engine over and begging the car to crank.
**No feet shots in this clip.**