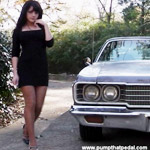 14+ minutes of this sexy seductress trying to get her old Dodge to start!  She tries calling for help but her man doesn’t answer the phone.  She starts out in a pair of patent Mary Jane style pumps and about half-way, she slips them off to try pumping in her stocking covered feet.
I couldn’t think of a better way to kick-off 2014 than with this sexy clip of Kimberly Heart!!  Happy New Year!!

***This clip might play better in Windows Media Player***