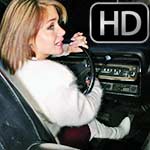 You’re in the backseat, ready to watch her struggle when she opens the door and slides in behind the steering wheel of the Coronet. Her white leather boots, purple leggings and white fur coat keep her cozy in the cold car. She cranks it over and over and over while begging the car to start. She keeps looking back at you for help but you’re not really interested in giving any. She wears the battery almost all the way down when she gets it to sputter and chug a bit, adding a bit more juice to the battery. Just gotta keep trying…and hope.