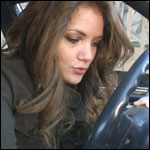 Kimberly Heart Begs & Pleads for the Caddy to Start

A long time and a few Cadillac’s ago, Kimberly Heart came out to play in the cars we had. I think this was the second video I ever did with her. She had such a great demeanor in the cars and this video is a perfect example of that. There were some small parts I could have cut out of me dropping lights or fiddling with the second camera but she keeps on cranking and doesn’t break character during it, so I left it in there.
She’s wearing a brown jacket, tight jeans, brown cowgirl boots.