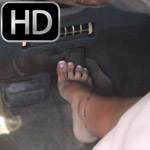 The Scenario:
“You’re here to pick me up for a date and you knock on the door. You ask if I like what I see, and then tell me to hurry up, because you have a surprise for me. We get in the car, and you look at me and ask what I was doing under your hood the other day. You figured me out, you caught me disabling your car so that I’d have to come out and fix it. You ask me to show you what I did, so we get out, and you’re being very flirty as we get under the hood. I disable the car, and we get back in. You ask me if you should start it, and then you begin cranking, and teasing me. You’re asking me what it is that turns me on about seeing her crank. When you get down to your feet, you see my reaction and figure me out. You then take your shoes off and seductively pump, rubbing your feet together and on the pedal, talking dirty and being very seductive.  At the end of the video, you look at me and ask if that was hot, grab me by the hand and pull me inside.”