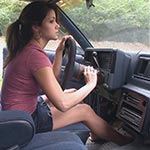 Kimberly has one hell of a time getting this old car to start.  Her skirt is short, her legs are bare and her feet are in a pair of tan flip flops.  She is frustrated and annoyed but looking sexy at the same time.  The Monte Carlo sputters often and makes her think it’s going to start but she just can’t get it to rev up enough to clear out.  She kicks off her flip flops and goes at it barefoot but that doesn’t really help either.

One thought on “Kimberly Heart Cranking the Monte Carlo – #261”