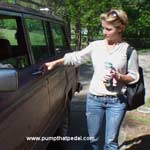 Kimberly Heart Starting Up the Jeep in Cowgirl Boots

The Jeep was having some fuel related issues and I was messing under the hood to determine if we’re going to use the Jeep or another car for this next video.  So I have Kimberly assist by starting up the Jeep (or trying to) and then turning it off and restarting it a few times.  This is a casual video where we talk a little bit.