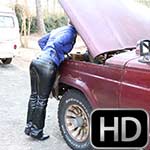 Kimberly Heart Crankin & Tinkerin On the Jeep in Leather

The hood is up and Kimberly is fiddling underneath it as the video opens. Her Jeep is giving her issues…as usual. She walks around to get in to see if it’ll start now. She leaves her left leg out of the car and her foot on the ground as there’s no sense getting all the way in because it might not start. She pumps the gas, begging the car to start as she tries starting it a bunch of times.
“Come oooon!” she says, getting frustrated and defeated.
She gets back out but you can tell she’s over it. She fiddles under the hood some more then gets in again to see if her luck has changed now. Doesn’t seem like it until the car sputters.
“There ya go!” she says hopeful. But when it goes back to just cranking it dashes her hopes again.