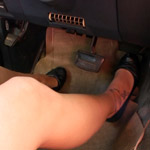 Kimberly drives from point A to point B in a cute little pleated skirt and ballet flats.

One thought on “Kimberly Heart Driving in Ballet Flats”