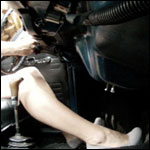 I leave the cameras rolling as I have Kimberly start the Bug and try to move it so it’s out of the way.  She can’t drive a stick shift, so she’s very nervous and stalls the old Bug a few times.  It takes her a bit to get it started, which is typical.  Her shorts show off her sexy bare legs and her body bounces as her size 7.5 feet pump the gas pedal in a pair of stiletto platform pumps.
This first camera view is from the passenger footwell looking across the car only.

3 thoughts on “Kimberly Heart Cranking & Moving the Bug, 1 of 2”