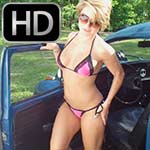 Kimberly Heart Cranking the Bug in a Bikini, ‘Spring Fever’

Weather is warming up, the sun is shining bright and girls are starting to wear less and less!  Kimberly Heart slips behind the wheel of the Bug wearing this killer pink bikini and some cowgirl boots!  You get a ‘naked’ view of her gorgeous legs pumping on that gas pedal!  She sweetly begs the car to start, bouncing up and down in the seat with each pump she gives the gas pedal.  She eventually gets it started and revs it up but the fun doesn’t end there!

3 thoughts on “Kimberly Heart Cranking the Bug in a Bikini, ‘Spring Fever’”