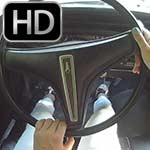 Kimberly Heart Pumping the Coronet – Her Point of View, 1 of 2

Testing out a new camera I got with the awesome Kimberly Heart.  No one has done this before, so I’m giving it a test run to see what you folks think about it.  You get to watch a hot girl struggle to start a car that’s being jumped off through her eyes.  Ever wonder what a model is looking at when they’re trying to start their car?  What about when they’re flooring the gas down the highway?  While revving the piss out of an engine, are they looking at their feet or the hood to see smoke come out of it?
Soon, these questions will be answered! 🙂

Let me know your thoughts with this and keep in mind, this is the first test run with the camera and footage.

5 thoughts on “Kimberly Heart Pumping the Coronet – Her Point of View, 1 of 2”