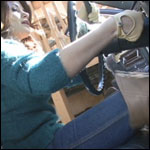 Kimberly Heart has a pair of vintage jeans, vintage boots and matching gloves in this cranking clip.  She has a very natural technique when cranking a car and her behavior is fun to watch!  She gets the Cadillac to sputter to life and it sounds awful.  She does some light revving to warm it up but it keeps conking out.  It’s also smoking pretty bad and she finally decides that she’s had enough.