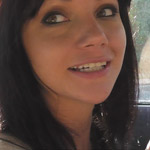 We just wrapped up a custom video at a nearby parking and our on our way back to PTP HQ.  At the stop sign leading out of the parking lot, the Monte Carlo stalls on her.  Kimberly Heart goes into “zomg!” mode and you can tell she is nervous.  She frantically starts cranking the car and pumping the gas as traffic whizzes by in front of her and cars start piling up behind her.  She gets it started but it dies again and this time, she’s rolling out into the road.  She manages to get the situation sorted out and she is on pins-n-needles the rest of the short trip home, fearful the car is going to die again.