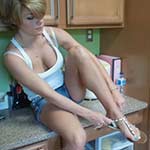 One thought on “Kimberly Heart Struggling in White Thong Sandals, 1 of 2”