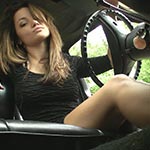 Kimberly Heart can make picking up garbage sexy as hell, so imagine putting her in a sexy dress, black stiletto pumps and behind the wheel of an old v8 car…yeah, bring on the heat!!