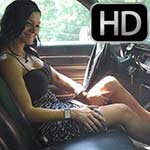 She’s playing a game with you in the old Coronet. It’s a take on the old ‘Red Light. Green Light.’ game but instead of closing her eyes and having people run towards her, she’s revving hard during the ‘Green Light’ phase and not revving during the ‘Red Light’ phase. You don’t know when or for how long each segment is going to be, so the anticipation is exciting! She gets the Coronet smoking from her hard revving in those tan wooden sandals. She adds to the tease by giving you a leg show throughout the video.