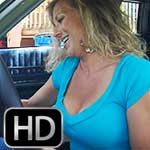 This is a long clip to end the week and it has a lot of stuff in it: cranking, flooded cranking, stalling, sputtering, driving, flooring, smoking, boots, the Monte Carlo and the Dodge Coronet.