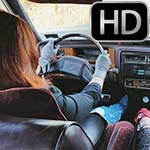 Laney & Vivian Take the Caddy to Run Errands, 1 of 2

They have to run to the post office to ship out a package. So why not take the Caddy? Laney is wearing tan over-the-knee cowgirl boots with red driving gloves while Vivian is wearing black and white over-the-knee cowgirl boots with gray leather gloves. Most of the filming is from the backseat with a segment from Laney’s point-of-view. Vivian is doing all the driving in this segment. She floors it when she can, revs it while coasting and reaches down to feel Laney’s boots from time to time.
This clip is all driving and revving.

One thought on “Laney & Vivian Take the Caddy to Run Errands, 1 of 2”