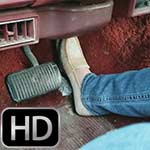 These two continue their startups of the remaining cars while wearing these loafers. The Jeep, Coronet, Bug and Volvo are left. So let’s see how successful they are!