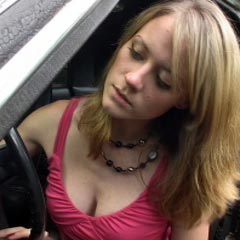 Madalynne heads to the Coronet to try and get it running.  She has on some sexy pink boots that show up well against the black carpet floorboard.  She pumps the gas, turning the key to try and get it started.  She gets the car to sputter and run shortly at times but then it keeps loading up and stalling.