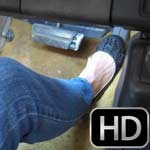 She gets to experience a little cold-starting in the old 77 Camaro.  She doesn’t warm it up much and she finds out the hard way that you should always warm up these old cars before hitting the road.  Each time she puts her foot on the gas to accelerate after she’s backed out into the road, the car dies.  This happens a few times before she’s finally able to get it going.  She has some fun driving fast along these back roads.

One thought on “Madalynn Raye Cold Staring & Driving Camaro in Ballet Flats, 1 of 2”