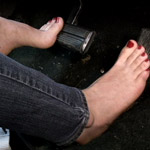 Madalynn wants to give you a sexy pedal pumping show in the Coronet.  She starts it up in her boots then quickly slides them and her socks off so she can rev it with her bare feet.  She pumps the gas pedal aggressively.  She makes the car rev over and over again until it gets low on gas and stalls on her.  She has to pump the gas pedal to get it started again so she can rev it some more.  This happens a few times before she decides to wrap things up.  She puts her boots back on and goes inside…you might want to ‘wrap it up’ too and follow!