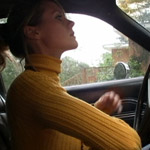 Madalynne Raye Has Issues Moving the Coronet in Boots

She finds the task of moving and parking the Coronet very very difficult when it keeps cutting out.  She works the gas pedal like a pro to try and keep it from dying.  Lots of stalling, frantic pumping, revving and frustration as she struggles with the big 4 door land barge in a pair of black knee high boots!