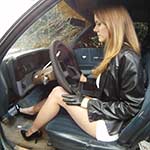 Madalynn Raye Takes the Monte Carlo Out, 1 of 2

Madalynn Raye is ready to go out and finds that her night might be ruined because the Monte Carlo doesn’t want to start.  She’s no stranger to this car giving her fits and tries not to flood it.  She gets the car to sputter and finally start up!  She revs it up in her shiny, patent pumps and hopes it doesn’t stall on her again.  It sounds like it’s ready to go and she puts it in gear and moves it out of it’s parking spot in the bushes and onto the driveway.  After that, she hits the road and all looks to be well…:)

2 thoughts on “Madalynn Raye Takes the Monte Carlo Out, 1 of 2”