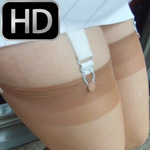 Helloooooo 2013!  Let’s step into this year with some sexy business suits, vintage stockings, a car that won’t start, 2 lovely ladies and some stilettos!
Vivian heads down a bit early to get her old Volvo warmed up.  It’s been giving her issues and this morning is no exception as it won’t start.  She begs for the car to start, doing everything she knows to start it but it just spins over and over and over.  She finally gives up and goes back in the house to get Madalynn.  Madalynn gives it a go but can’t get the damn thing started either!  Both girls are late now and the boss checks in on the work radio to see what their hold up is.  They explain the car won’t start but he’s not too happy (or convinced) and demands them to get to work or be fired!