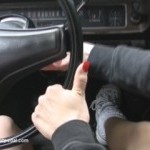 Madalynn & Vivian Heading to Work, 2 of 2

Madalynn and Vivian are working the same shift and have to scurry out the door so that they both aren’t late for work.  They’re taking Madalynn’s car, so Vivian slides across the bench seat to the passenger side.  There’s a slight chill in the air and it’s making Maddy’s car a bit difficult to crank.  She keeps trying but isn’t having much luck.  Vivian decides to scoot over and try it from the passenger side.  She manages to get the car to sputter but it won’t stay running.  Each time the car does start, they try revving it to warm it up but it keeps conking out.  They do manage to get the car moving in this second clip but it stalls out constantly like it’s out of gas.  Vivian finally tells Maddy that they need to take her boyfriend’s car so they don’t get fired.

One thought on “Madalynn & Vivian Heading to Work, 2 of 2”