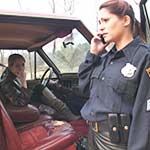 Vivian got her squad car running but it’s not sounding right. She’s letting it warm up with the drivers door open so she can hear the engine running better and yeah, something definitely sounds off. The car stalls on her and she tries getting it started again but ends up killing the battery. She heads back to Madalynn’s car to use her phone and call the office. They tell her to take the old bus they confiscated the other day. Madalynn is unsympathetic and just laughs at Vivian having to drive that old thing.
Vivian gets in the bus but quickly finds out it’s worse off than her car. It won’t even spin over at all…dead battery? So she goes to the next car, an old Volvo station wagon and finds the keys and gets it started after some cranking and pumping with her boots. She warms it up and goes to back out but stalls it out. After a little more cranking, she gets it going in the right direction and looks like she can finally make it to the station to begin her shift.

2 thoughts on “Madalynn Gives Mall Cop Vivian a Ride to Squad Car, 2 of 2”