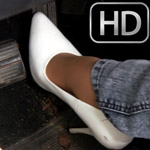 Mandie comes in wearing the outfit you like for her to have car trouble in. She asks if you like it when her car doesn’t start from her flooding it? She even demonstrates how she’s going to flood it for you by sitting in a chair and moving her foot in a pumping motion. Little does she know that you’ve sabotaged the car for it to not start…ever! When she takes you to the car for your little show, she plays it up and floods it out but when she really wants to get it started and it’s not cooperating, she starts getting upset. Now the battery is dying as well…oh-no!!