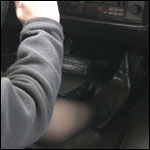 Mandie is waiting on the front porch for Tinsley to show up. After becoming impatient, she decides to leave but her car won’t start. After pumping & cranking for a few minutes, she shoots a text to see where Tinsley is at and before trying to start the car again, she kicks off her leather heels, rubs her feet together a bit with her pantyhose and tries round 2 of starting the car. But still no luck and the battery is dying as well…

One thought on “Mandie Cranking the Coronet – #157”