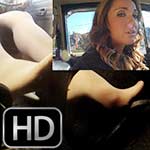 Mandie is pissed…I mean, P-I-S-S-E-D off at you!  She’s not sure why she’s letting you take her out after she caught you talking to another girl.  You may think it was harmless talk but she doesn’t see it that way.  Don’t even think about touching her, either!  She can’t really think because she’s mad but whatever, she goes to start the car and it doesn’t start for her.  Yeah, that’s not going to help at all!  She scolds you in-between cranking the car and her dialogue is as much to the car as it is to you.  Even though she’s mad and you’re in the doghouse, you can’t help but admire her amazing legs wrapped in some sheer white pantyhose and her feet sporting some shiny white leather stiletto pumps.  You try to make a move as you get close to her legs but she shuts you down with the quickness!  She eventually kicks her shoes off and tries cranking the car in just her nylon covered feet and she finds success with that, looks like she got one of her pieces of shit to behave.
The video continues with her working the pedals in her pantyhose and as the drive progresses, her anger is cooling off and it looks like you might make it through this after all.