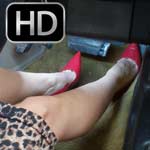 Oh the trial and tribulations of borrowing a friends car.  Sit back and watch Mandie do her thing!!