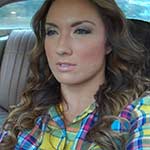 I gave her a camera and the keys to the Camaro and turned her loose.  A perfect example of Mandie being Mandie and why we love the hell out of her!  Some cranking in the beginning, lots of driving, some revving while coasting and a whole lot of ‘Mandie flair’ throughout the video.  She kicks her loafers off for a while and drives in her stocking covered feet.